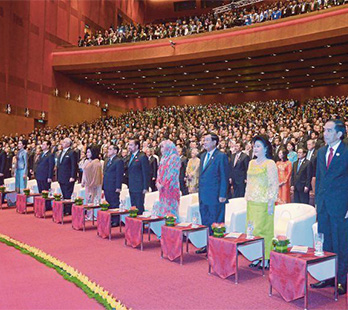 PROTECTIONISM is not a new phenomena. In the early years of the Great Depression, industrialised countries, such as the United States and the United Kingdom, raised import duties to address falling agricultural prices and stock market meltdown. The move was not only economically sensible, but politically acceptable as well.

The creation of the General Agreement on Tariffs and Trade, and subsequently the World Trade Organisation (WTO), has made cross-border trade much easier than before. However, it has also made protectionism a dirty word.

The successful Brexit referendum and Donald Trump’s presidential election campaign have turned such negative connotation into somewhat a neutral one. If there is a dirty word that can win you votes, protectionism is probably the only one out there.

There are serious concerns over the rising popularity of protectionism of late, which could erode trust in international trade; a major determinant of economic growth in the post-war period. Instead of suppressing the idea, which is indeed optimistic, the question that we should ask ourselves is whether businesses could run as usual in the era of rising protectionism.

Without a doubt, analysts are worried about trade retaliation in affected markets. Recently, the media went frantic over possible retaliation by the UK government over the Boeing-Bombardier row. What we should take note of is that the case could be referred to the WTO Trade Dispute Settlement and it will take years before rulings are issued. In that time, life goes on.

Protectionism favours vested interest groups at the expense of consumer welfare. It is widely speculated that consumers would need to pay higher fares for cabs following Transport for London’s decision to not renew Uber’s private hire operator licence. However, during the appeal process, consumers are still able to use Uber’s services as usual, or use other similar e-hailing mobile apps.
In the previous article (“Reforming Malaysia’s Automotive Industry”, NST Aug 15), this author argued the Malaysian automotive industry should undergo clear reforms after years of high protection.

Despite the fact that motor vehicle financing accounted for 14.6 per cent of household debt last year, consumers continue to fork out a significant portion of their incomes to own a car.

Trump’s move to remove the US from the Trans-Pacific Partnership (TPP) is, in this author’s view, a winning strategy to get others to lower their shields against US’s offensive approach in trade negotiations. The Obama administration used the same strategy in the renegotiation of US-Korea Free Trade Agreement in the past and it worked tremendously in the US’s favour.

President Trump’s move did little to stop others from pursuing their national interests. The remaining countries are renegotiating the TPP without the US, while others continue with substitutes and complementary negotiations involving the European Union and/or China as major recipients.

In addition, seven TPP member countries continue to pursue a separate trade deal under Asean’s Regional Comprehensive Economic Partnership. The negotiations are still ongoing and the demise of the TPP did little to derail, or even aid, the negotiations.

Speaking of Asean, member countries have been adopting non-tariff measures (NTMs) to shield domestic players from foreign competition. As of 2015, almost 6,000 NTMs have been identified and the number is expected to increase over time. Having said that, the steady increase in NTMs has not prompted its members to resort to extreme economic protectionism. As a developing economy, Asean is clearly not in favour of protectionism and continues with its 2025 Asean Economic Community Blueprint as the way forward.

The popularity of protectionism in the Western world cannot stop China to promote its Belt and Road Initiative (BRI). It has become a widely-accepted concept with about 70 participating countries worldwide and membership could still grow over time. In a think tank BRI forum that this author participated in Guangzhou recently, one scholar suggested China to consider having a free trade agreement with participating member countries in the future, which is not entirely a bad call after all.

In the grand scheme of things, protectionism goes beyond the typical textbook definition. It is no longer about cross-border trade restrictions but also others such as travel visa, intellectual property rights and affirmative action. It is much easier to substantiate these measures as they are allowed under the present multilateral trading system.

Irrespective of its context, protectionism negates the need to achieve economies of scale. It punishes efficient players but rewards uncompetitive behaviours in the marketplace.

Closer to home, the present administration’s aim is all about putting Malaysia back in the globalisation track. The National Transformation 2050Programme continues as usual despite facing a rebuke from pressure groups.

From the government’s perspective, addressing protectionism is not entirely about removing them from public policy. Interestingly, it is also about allaying fears that come from the opposition leader, who enacted deep protectionist policies when he was in power.