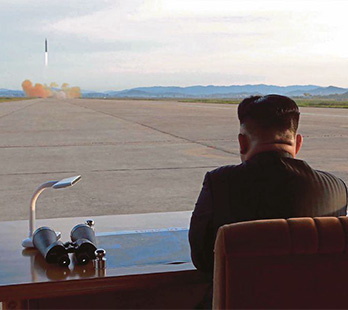 THE year 2017 unfolded with much activity on the Korean peninsula. The year saw around 20 ballistic missile launches and what was dubbed the most powerful nuclear test to date by the Democratic Republic of Korea (DPRK). Rhetoric and bluster flared between the leaders of the DPRK and the United States.

For the Southeast Asian region, developments in Northeast Asia throughout the year draw three observations. The first is the perception of instability given by inflammatory remarks and tests, the second is the unpredictability of the DPRK regime cooled some bilateral relations with the state and the third relates to the Republic of Korea (ROK) President Moon Jae-in’s recent announcement of a new regional thrust, which some say, aims to include Asean in stabilising processes.

FIRST, remarks exchanged between the US and the DPRK, such as US Secretary of Defence James Mattis’ “massive military response” with the mention of “total annihilation” and the DPRK’s vow to catapult the US into an “unimaginable sea of fire”, raised tensions between both countries. While such language was not rare in past interactions with the DPRK, instantaneous and personal responses in the digital age were deemed newsworthy in social media and threatened to increase the situational temperature. Without clarity of intention, there is no way one party could know if the “fire” and “fury” of the other party would result in physical action.

After all, President Donald Trump only entered office in January and views from the administration seemed to vary.

While Trump’s National Security adviser H.R. McMaster warned of the potential of war increasing every day due to the threat posed by DPRK’s rapid technological advances, Secretary of State Rex Tillerson alluded to using the US’ lines of communication with DPRK that lent the possibility of future calm. Further, Yong Suk Lee, deputy assistant director of the CIA’s Korea Mission Centre, assessed that the DPRK was not seeking war and that its missile tests were really for deterrence.

SECOND, the unpredictability and violence displayed by the DPRK has distanced some nations from ties with it.

On Nov 9, Prime Minister Datuk Seri Najib Razak mentioned that continued military aggression by the DPRK caused the nation to reconsider relations with it. The statement came in a year that began with the death of Kim Jong-nam at klia2, which brought the DPRK’s clandestine activities to the fore. Malaysia, being non-aligned, established relations with the DPRK in 1973. The death of Jong-nam strained relations as Kim Jong-un undermined the legitimacy of investigations in Malaysia and later, held Malaysian diplomats hostage. Malaysia ceased the visa-free programme for North Korean visitors and stopped imports from the country in October.

Malaysia is not the only member of Asean experiencing a chill in relations with the DPRK. Vietnam is reportedly taking new actions to enforce sanctions against the DPRK, even after banning entry of some of the latter’s nationals last year. Earlier this year, the Philippines suspended bilateral trade, including the export of raw computer chips to the DPRK in compliance with a United Nations Security Council resolution. Although the degree of warmth between Asean member states and the DPRK varies, the Asean Regional Forum remains the sole regional multilateral forum that includes the DPRK as participants.

THIRD, the possible roles of Asean depend in part on Moon’s announcement of a New Southern Policy in Indonesia last month. By pursuing a policy separate from the Indo-Pacific doctrine proposed by Trump, the ROK appears to be pursuing an independent foreign policy which balances diplomatic obligations and the reality of the nation’s geostrategic location. Mainly driven by economic factors, there is speculation that the New Southern Policy’s 3Ps of people, peace and prosperity means the possible inclusion of Asean member states and peace processes in the region.

There are reasons to believe Asean can play a larger role. Despite Asean foreign ministers showing grave concerns over the DPRK’s missile tests, the grouping has so far resisted pressures to cease the DPRK’s membership in the Asean Regional Forum. Individually, there are Asean member states that share a special relationship with Pyongyang, which can stress or soften approaches in mediation.

However, to play a larger role as an institution, Asean has to determine the part it may wish to have. Might Asean aim to provide the negotiating table or enforce sanctions that can, perhaps, bring the DPRK to the said table? A larger role will require a strategy to sustain, especially if enforcement through sticks and sanctions may alienate the DPRK from the table.

In 2018, one can hope for a region less turbulent with threats and missiles. The Philippine president and outgoing Asean chair, Rodrigo Duterte, once stated that someone had to assure Jong-un that nobody was threatening him.

Speaking to Jong-un is of priority for stability in the peninsula. With the visit of a UN special envoy to the DPRK and global interest in drawing the situation from the brink, perhaps 2018 can play out to a calmer year.