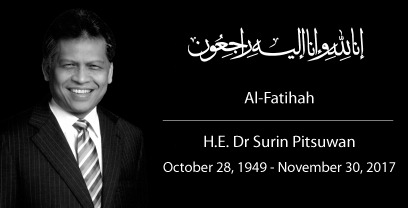 The Management and Staff of the Institute of Strategic and International Studies (ISIS) Malaysia grieve for the loss of our beloved friend and Southeast Asia’s Statesman and Intellectual, H.E. Dr Surin Pitsuwan. May his soul live in everlasting peace with the Almighty.

Words cannot fully express our deepest sympathies which go to the family and friends of Dr Surin in this dark hour. May we, however, celebrate his life and strive to achieve his dream of a united, peaceful and prosperous Southeast Asia.

In Dr Surin Pitsuwan’s passing last evening, Thailand mourned the loss of a former foreign minister, a son of the south, and a patriotic Democrat.

To Southeast Asia’s foreign policy community, Dr Surin was the consummate statesman – thoughtful, eloquent, humble, and always ready with a warm, genuine smile. As ASEAN’s Champion-in-Chief, he was the organisation’s and region’s tireless advocate who on many occasions continued to brandish a pocket copy of the ASEAN Charter long after he had served as Secretary-General.

In being so inspired about ASEAN, he inspired so many in the generation that came after him. His impassioned speeches about regionalism, done so often that he rarely needed a prepared text, brought ASEAN to life for so many younger policymakers. He was one of only a few who could inject a real sense of optimism and vibrancy to an unfortunately and unfairly oft-maligned organisation. The star-struck look and hanging jaws of many of the 20- and 30-something year old attendees when Dr Surin spoke at a regional forum on ASEAN that ISIS Malaysia convened only a few months ago affirmed his rockstar status even after all those years.

Dr Surin was a great friend to ISIS Malaysia for over two decades. Despite his punishingly hectic schedule, he somehow always spared the time to repeatedly grace our events and even pen his views in our recent publication on the future of ASEAN. “Busy people usually deliver on their promise”, he wrote in his email to us. You could almost see him wink, reading that line.

Above all, Dr Surin was a bridge-builder in background and in service. He never wore his faith on his sleeve but he never shied away from his identity, either. He was Thai, Muslim, American-educated, and a scholar of the Middle East. He was equally at ease serving his home province in southern Thailand as he was resolving crises from the cosmopolitan capitals of Bangkok, Jakarta, and New York. From east to west and north to south, he was indefatigable in promoting understanding, peace, security, stability, and conciliation.

One of my fondest, recent memories of Dr Surin is from Salzburg late last year, at a seminar he co-facilitated on “Leadership for Regional Cooperation in Asia” with Dr Charles Morrison, former president of the East-West Center. Chatting over dinner one night, Dr Surin convinced a few of us to witness a Roman Catholic service at the magnificent seventeenth-century Salzburg Cathedral in town before the crack of dawn the next day. And so, we did. We did not get to experience the splendour of a full mass that morning. But I will never forget the image of our small group of Southeast Asians and an American comprising an agnostic, two Catholics, and a Muslim being led down the cathedral by another practising Muslim (Dr Surin) to sit through the German service until it ended, heads bowed down in awe, deference, and respect for something greater than ourselves.

It seemed to me paradoxical yet fitting that as we were in Salzburg to contemplate the future of Asia, Dr Surin had unwittingly reminded us that our path ahead lay in our past as a region of tolerance and diversity, and that our collective sense of security could only be as strong as our understanding and appreciation of the Other. As we walked the 2 kilometres back in freezing temperatures over coffee and pastries that Dr Surin had bought us, it struck me that there were fewer leaders than he who could have credibly impressed those thoughts upon us without even having meant to.

Dr Surin embodied the ideals and promise of Southeast Asia. So many of us in the region were privileged and honoured to have called him a mentor, colleague, and friend. He will be deeply missed.

To Him do we belong and to Him shall we return. Al-Fatihah.