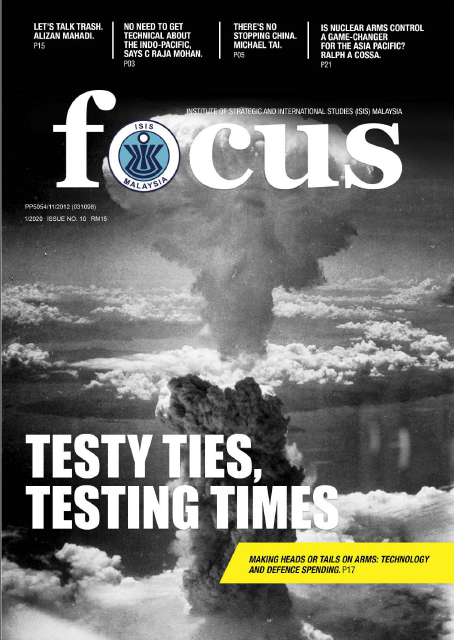 Like it or leave it, the “Indo-Pacific” and its derivatives – Indo-Pacific Strategy, Indo-Pacific Vision, Free and Open Indo-Pacific – are still in vogue. Will this help or hinder a crowded region in these turbulent times? ASEAN’s doubts are evident in its “Outlook” on the Indo-Pacific, a classic statement of fudgy indifference in ASEAN diplomatese, not least because the whole concept may well compromise ASEAN Centrality.

Notwithstanding attempts to dilute or blunt China’s rise, such schemes as “Indo-Pacific” are unlikely to work. Regardless of any justification, such efforts are too little too late in trying to roll back China’s ascendancy. They may cause some deleterious economic impact such as that from the US-China trade dispute, but because the contagion is inevitably globalised it will find no appreciable favour abroad.

The mix of painful new costs and limited gains for third countries from the US-China trade battle varies, but any dividends from trade and investment diversion hardly make up for losses through barriers to trade and other complications. To a small and vulnerable economy like Malaysia’s, the risks of damage from conflict between economic superpowers are always hazardous and never manageable.

Meanwhile Southeast Asia has become a magnet for just about any party with extra-territorial interests or designs. Besides the United States and China, Japan, Russia, South Korea, Taiwan, India and Europe have a new or renewed interest in this region. It is clearly time for more distinct ASEAN leadership to seize the moment, if not for more prominent ASEAN leaders to emerge but who remain elusive.

Indeed the larger East Asia deserves more enlightened policies that are pro-active and pre-emptive. China’s ban on importing waste for example has dislocated waste shipments and caused localised environmental crises in several countries. As leading waste producers themselves, developed Western nations stand exposed as being underdeveloped in waste management, which should count towards their liabilities in contributing to environmental degradation.

On the “harder” regional front, arms procurements are competitive enough to resemble an arms race whether or not an actual race is on. Between the pair of giants, US weapons-grade technology is still streets ahead of China’s despite the latter’s impressive gains in recent years. Cost remains a factor, both in US arms sales pitches abroad and in US defence budgets that determine research and development (R&D) and acquisitions.

It does not help when the nuclear arms control environment is in a parlous state. Limits and reductions are politically correct but seldom sought or respected. The world needs sane and sincere commitments to genuine cutbacks, not more pious statements or empty rhetoric. What international development can precipitate the necessary measures, short of a miracle or a nuclear apocalypse?

Armed conflict may not yet be displaced by “keyboard wars”, but cybertroopers have long been deployed in skirmishes. There will be more digital conflicts and they will involve greater sophistication and cost, prompting questions about regulatory frameworks and legal limits in the public interest. However this impinges on such values as free speech, so even the grey areas have still greyer edges.

These themes are explored in our current issue of ISIS Focus. For better or worse, they are themes likely to be with us for some time yet.

Putting the Indo-Pacific in Perspective
By C Raja Mohan

We should be less fixated on the terminological debates surrounding regional architectures since they are constantly constructed and deconstructed, writes C Raja Mohan.

The ongoing trade war has failed to impede the speed of China’s development, argues Michael Tai

The US-China Trade War: Is Malaysia Benefiting from “Diversions” in US Import Demand?
By Calvin Cheng

The significance of the US-China trade conflict may be slightly more ambiguous for Malaysia and other exporting economies in the region.

Trash Talk: Is Waste Emerging as a New Security Threat?
By Alizan Mahadi

Making Heads or Tails on Arms: Technology and Defence Spending
By Izzah Khairina

Nuclear Arms Control in Crisis: A Game-Changer for the Asia Pacific?
By Ralph A Cossa

National interests stand in the way of an effective and sustainable nuclear arms control, states Ralph A Cossa

Everywhere and Nowhere: Cybertroopers and the Battle for Democracy
By Harris Zainul