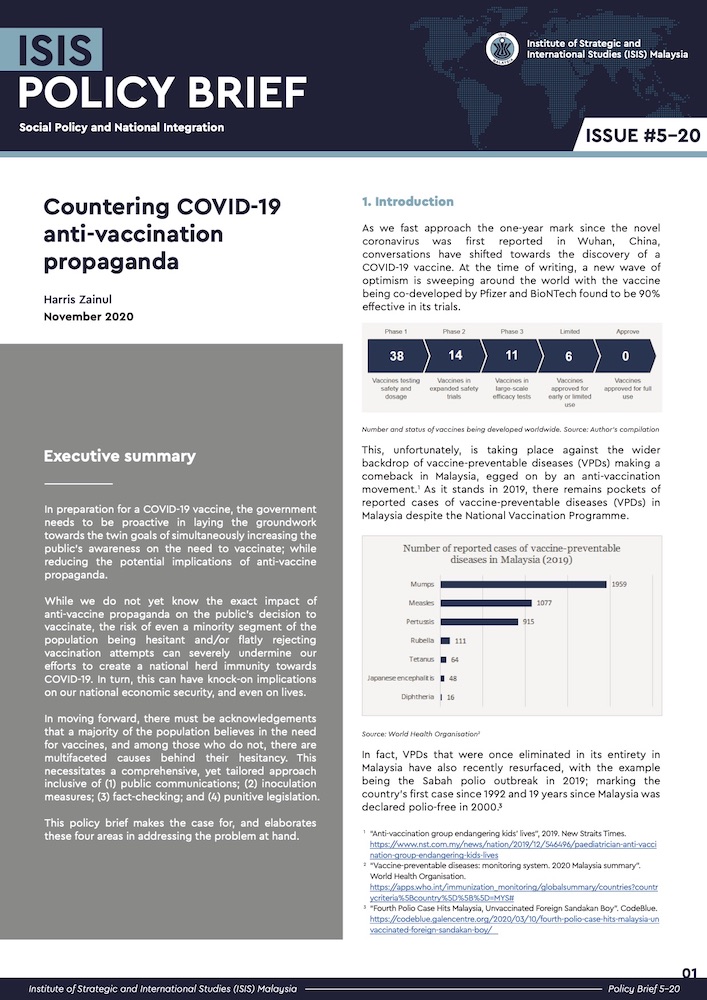 In preparation for a COVID-19 vaccine, the government needs to be proactive in laying the groundwork towards the twin goals of simultaneously increasing the public’s awareness on the need to vaccinate; while reducing the potential implications of anti-vaccine propaganda.

While we do not yet know the exact impact of anti-vaccine propaganda on the public’s decision to vaccinate, the risk of even a minority segment of the population being hesitant and/or flatly rejecting vaccination attempts can severely undermine our efforts to create a national herd immunity towards COVID-19. In turn, this can have knock-on implications on our national economic security, and even on lives.

In moving forward, there must be acknowledgements that a majority of the population believes in the need for vaccines, and among those who do not, there are multifaceted causes behind their hesitancy. This necessitates a comprehensive, yet tailored approach inclusive of (1) public communications; (2) inoculation measures; (3) fact-checking; and (4) punitive legislation.

This policy brief makes the case for, and elaborates these four areas in addressing the problem at hand.

Harris Zainul is an Analyst at the Institute of Strategic and International Studies (ISIS) Malaysia where he studies national trends and developments with the goal of translating these into public policy recommendations. His primary research areas include policy responses to mis- and dis-information; the consequences of mis- and dis-information on democracy and society; and Southeast Asian and Malaysian politics, human rights, and democratisation. His other research areas include China’s Belt and Road Initiative (BRI), ASEAN-Korea relations, and the geopolitics of the Mekong River. In his professional and personal capacity, he has briefed both domestic and regional stakeholders on his research outcomes, and has been published in the ISIS Focus, New Straits Times, Malay Mail, Malaysiakini, Channel News Asia, The Diplomat, Lowy Institute's The Interpreter, and the Australian National University's East Asia Forum. His commentary has been featured in BFM 89.9, CNBC, Voice of America, New Naratif, The Nation, the ASEAN Post, Arab News, ABC News, Arirang TV, Malaysiakini and the South China Morning Post. On top of his research roles, he is also experienced in conducting stakeholder mapping and engagement, conference and event management, and is responsible for ISIS Malaysia’s social media and public-facing digital strategies. Formerly, he had served as a Minister-appointed member of the National Youth Consultative Council, a Ministry-appointed member of the Youth Task Force on Foreign Policy, an elected member of the Malaysian Youth Parliament, and the Special Officer and Perdana Fellow to the Deputy Prime Minister of Malaysia. He holds a MA in International Studies and Diplomacy from the School of Oriental and African Studies (SOAS) in London and a Bachelor of Laws with Honours (LL.B) from the University of Liverpool.
By: Harris Zainul