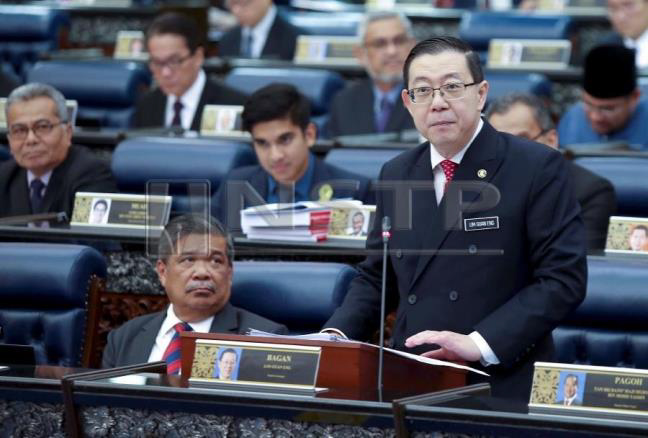 AFTER much anticipation, Pakatan Harapan’s maiden budget as the Federal Government was finally unveiled.

There are clear winners in the budget such as the introduction of the Fiscal Responsibility Act and Government Procurement Act, the review of key labour laws and the setting up of a special task force on the Ministry of Finance Incorporated companies.

These changes are in consonance with the needed legislative changes that have been plaguing the country’s economic progress for decades. It will also inevitably bring Malaysia closer to ratifying the Comprehensive and Progressive Trans-Pacific Partnership, but at its own pace. The public rebuke of the budget, however, is not about these reforms.

As far as the 2019 Budget is concerned, there are three points worth noting;
one, what was widely predicted as a contractionary budget had become expansionary, leaving the country more vulnerable and exposed to external shocks than it already is.

Two, the dent on income due to the removal of the Goods and Services Tax is being remedied by introducing peripheral revenue raising measures and profits of key state-owned enterprises.

And three, the follow-up to the promises made under Buku Harapan remains lacklustre.

That said, the idea behind a bigger budget is perhaps to sustain the coalition’s post-GE14 euphoria, but the end result is arguable.

Many analysts, including this author, opine that hard reforms should have been taken in the early years of a political cycle and not later.

This should give ample time for the PH government to placate dissent and make necessary adjustments in the remaining term.

Funnily enough, while the government’s rigourous cost-cutting measures have been largely on operational aspects, the expansionary budget is due to the increase in operating expenditure (opex).

Emoluments and retirement charges remain high despite a smaller cabinet. It’s worth noting, however, that subsidies are now better targeted, which is a huge plus point, but they come with a higher administrative burden.

If the country’s financial situation is as dire as the government has been painting it, opex should have come down to reflect prudent spending. It appears that the 2019 Budget has deviated from the signals the government had propagated in recent months.

Owing to the overemphasis on federal debt, this author argues that the government will face challenges in introducing new infrastructure projects for future growth. In this budget, development expenditure lacks traction while planned mega projects such as the high-speed rail and the east coast rail link will be costly to execute in the future.

The Budget is also being criticised for the lack of policy direction despite the introduction of a number of policy tweaks. The Bantuan Sara Hidup is now a new-and-improved BR1M with a narrower focus on the size of household, neglecting the government’s own call to abolish it.

The Automatic Price Mechanism for retail fuel prices is back on the menu, coupled with an idea of a targeted oil subsidy for B40 motorists.

The home-ownership drive remains as is, thus further emphasising the unrelenting quest to tackle the property overhang from the supply angle.

It is no surprise that the biggest criticism against the Budget is primarily on its impending departure from pledges in the Buku Harapan. A number of election promises, including the follow-up to the 100-day promises, remain unfulfilled without a clear pathway on how to honour them in the near future. In fact, some of them are now reversed such as the stabilised retail oil price and the National Higher Education Fund (PTPTN) repayment.

Clarification of government announcements should not be seen like an afterthought. The public must be comforted by the fact that due diligence, as far as new initiatives are concerned, has been fully studied and exhausted by key stakeholders. The B40 petrol subsidy, for example, is fast becoming like an enforcement nightmare, thus heightening the chances of policy reversal in the near future.

The government must defy the desire to propitiate every member of the public, as practised by the previous government. Nonetheless, as the government of the day, it is imperative for the coalition to abate, and not to exacerbate, public discomfort by reconnecting with the rakyat.

The manifesto must be realigned to reflect today’s economic realities.

Growth strategies in tough times must be explicit. It remains to be seen how private consumption would play a bigger role without tax cuts and substantial increase in wages and productivity.

Foreign direct investment (FDI) can no longer depend on financial incentives like how it was done in the past. Deepening export markets must be complemented with the demand side by engaging in highquality trade agreements. Perhaps we should not put such high hopes on PH’s first term as government.

If the manifesto is indeed an arduous task on many fronts, is it not our responsibility to urge the government to devise policies that promote pragmatism rather than populism?

Shouldn’t the government avoid mistakes of the past government rather than amplify them?