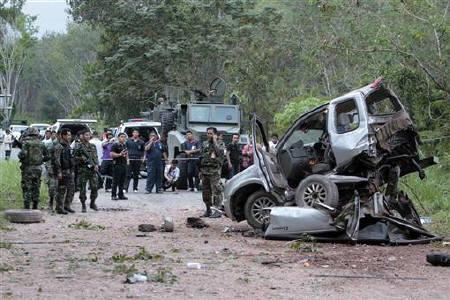 Formal and informal identity groups have been divided and separated. Yet a positive consequence has been convergent currents that bring diverse players together in efforts to heal.

For years, different sectors have tried to forge a peace agreement individually or together, but to no avail. Seemingly random violence would return in sporadic bursts of gunfire and bombings.

There is even a multi-pronged approach transcending top-level negotiations in encompassing grassroots and private sector groups. Still, peace and a vague peace process remained elusive.

Last weekend saw an attempt in Kota Bharu to build better understanding among mostly Thai stakeholders of Malaysia’s role just across the border. There was neither room nor patience for tired old clichés. But there was a palpable yearning for a peace process that would be significantly wholistic, meaningfully inclusive and genuinely transformational.

A primary subtext of the proceedings was hope, a hope deriving from Malaysia’s new Pakatan Harapan Government. In August the new Government appointed Tan Sri Rahim Noor as the new Facilitator for the Thai peace talks. There was some fuss over the appointment because of Rahim’s assault on Datuk Seri Anwar Ibrahim 20 years ago, but that was a parochial Malaysian issue. Anwar himself did not object to the appointment. Rahim is credited for successfully negotiating an end to the armed insurgency of the Communist Party of Malaya less than a decade before, the first achievement of its kind in the world. He is understood to have launched innovative approaches to ensure success in talks between the Thai Government and the Mara Pattani rebel umbrella group.

Thai peace activists and grassroots organisations are cautiously optimistic. The prospect of being distracted by emotion remains throughout the peace process.

That is why it is important to be grounded in the realities rather than swayed by the sentiment of the moment. Among these realities is that no single person or group, whether on the Government or rebel side, fully controls the situation for establishing or maintaining peace. The cause of violence is a composite of forces and factors, as is any solution. Another reality is that peace must be earned through the contribution and commitment of all concerned. It is too important to be left to “leaders” alone.

The third reality is that reasonable time and sufficient patience are needed to move towards peace. It cannot be switched on at will, but must be worked on doggedly and painstakingly, often in tentative half steps. An imperative is to secure the active participation of key individuals who matter in negotiations, not favourites or collaborators who cannot deliver. This reality is as crucial as it is often neglected. The fifth reality is to avoid the disabling limitations of previous talks.

This means rejecting the artificial parameters of the past five years where Thai negotiators lacked credibility and authority. The problem with the attempted peace process since 2013 was to have been a legacy of Thaksin Shinawatra’s cynically contrived attempt to play peacemaker. Done under cover of his sister Yingluck’s premiership, the attempt was neither persuasive nor convincing. This “old” series of talks involved Hassan Taib, appearing for Barisan Revolusi Nasional (BRN) but without their approval; Paradorn Pattanatabut for the Thai Government; and Datuk Seri Ahmad Zamzamin Hashim as Malaysian Facilitator appointed by the Barisan Nasional Government.

Now the new team involves such rebel leaders as Ustaz Shukri of the BRN and Kasturi Mahkota of Pulo, General Aksara Kerdphol for the Thai Government, and Rahim as Malaysian Facilitator. The conflict is entirely a Thai problem, for which only a Thai solution is acceptable. Malaysia’s role could only have come with an invitation from the Thais and with the approval of all Thai parties concerned. But how have the Thai parties themselves been faring? Have they been playing their respective parts despite their bitter differences? The post-coup Government of Prime Minister Prayut Chan-ocha has so far promised more than it has delivered.

If it can make use of Malaysia’s new Facilitator to step up its efforts, it can make its pledges more credible. The rebels themselves are split not only among different groups, each major group is further split into factions. Factionalism is rife and defined diversely according to tendency, sub-ideology and generation. Nonetheless there is some cause for hope and optimism. Since the election is due in February, success or failure in the peace process will rub off on the electoral prospects of Prayut and his Government. Delivering peace and order including to the Deep South is among the justifications for the present administration’s tenure. A special effort to secure peace may be expected between now and February. A military-installed administration may also enjoy better prospects at securing peace.

While a civilian Government’s peace agreement may or may not be respected by a politically influential army, a peace settlement reached by an army-led administration is more likely to be heeded by the generals. There are three major phases in the current newer era of peacebuilding. The last couple of months represented the initial familiarisation period between the two sets of Thai negotiators. The second phase is happening now: each of the two sides speaking separately with the Facilitator in setting their terms and defining their position.

The third phase would involve the two teams of negotiators meeting faceto-face in direct talks. Without major disruption, that could begin in the first quarter of 2019, helped by election campaigning. Kasturi anticipates positive developments in early 2019. No other individual or group has contradicted his expectation.

There is an important fourth phase not directly involving the formal negotiators – the women’s and youth constituencies along with civil society groups. It is important to build this more rounded society now, to follow seamlessly from the newly established peace.

Women and youth are essential in forming the social fabric and a viable future that a just and durable peace deserves – and requires.

Valuable lessons may be drawn within Thailand’s Asean neighbourhood as well. President Duterte’s Philippines is pushing ahead with the Bangsamoro Autonomous Region in southwestern Mindanao, despite some spoilers in Congress. He is also embarking on a federal structure that would devolve power and responsibilities to the provinces.

Malaysian federalism has existed since Merdeka but in a tightish centralised embrace. At least as significant is a policy of integration that accepts minority cultures, instead of a suffocating assimilation demanding conformity to the dominant culture.

Ultimately Thailand must find its own way towards peace in the Deep South. For Bangkok to spare more time and effort on legitimate southern concerns would be a good place to start.