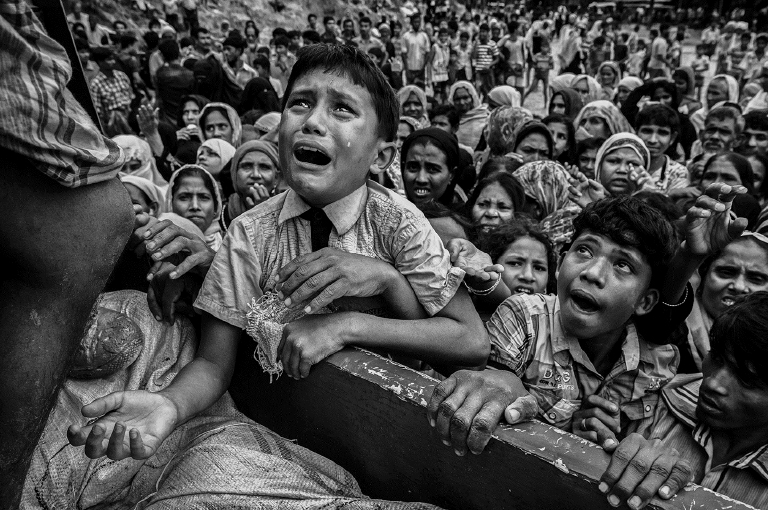 THE problem with tracing the origins of Myanmar’s current massacres of its Rohingya people is that the starting point goes back many years.

Myanmar’s campaign of genocide has been consistent albeit punctuated by peaks and troughs, with violent discrimination against Muslim Burmese people in Arakan (later renamed Rakhine) state dating to at least 1930. It is easy to forget that until 1982 Rohingyas were still accorded Burmese citizenship, but their treatment by the military government and the general public soon deteriorated sharply. For many observers, the “current round” of mass killings and rapes of Rohingya villagers with looting and burning of their homes began in August last year. There have been many horrendous rounds, with each merging into the next.

More limited and stilted have been international campaigns against Myanmar’s government for allowing, aiding, abetting and participating in the crimes. Even so, the current international campaign reaches back to at least December 2016 when fourteen Nobel laureates including 12 Nobel Peace Prize laureates, with other public figures, urged the UN Security Council to halt the humanitarian crisis confronting the Rohingyas.

International opinion has grown steadily against Myanmar State Councillor Aung San Suu Kyi, a once-respected leader in her people’s struggle for democracy. In the 2015 election campaign she boasted that she would be “more powerful than the President,” even though the army-friendly Constitution barred her from running for the presidency. She won the election but has since been less powerful than a presidential poodle. Worse, she has served to deny all the atrocities committed by state forces and reported by credible international monitors, instead condemning Myanmar’s accusers for spreading false news.

There have been many horrendous rounds, with each merging into the next. Questions about possibly recalling her Nobel Peace Prize arose, then faded away. If the Nobel Committee knew as much about her in 1991 when they presented it as they do now, she might never have received it.

Other awards she received as figurehead of Myanmar’s struggle for democracy have been withdrawn. Oxford University and the US Holocaust Memorial Museum have revoked the prestigious honours they had bestowed on her earlier. In 2015 the US Holocaust Memorial Museum sent a factfinding team to Myanmar to observe conditions of the Rohingya community on the ground. They came away horrified that the conditions for genocide were already in place.

More critical voices from concerned distinguished persons were heard from around the world. The Dalai Lama reproached Myanmar’s mostly “Buddhist” mass murderers, saying that Buddha himself would have helped the Rohingyas.

The spotlight remained on Suu Kyi as the country’s (nominal) leader. Last year Yanghee Lee, the UN’s special rapporteur on human rights, called on Suu Kyi to issue a statement but she remained silent.

Increasingly, Suu Kyi’s stubbornness has made her criticise the critics of Myanmar’s genocide while denying any crimes had taken place. This month, Prince Zeid bin Ra’ad Zeid al-Hussein, the United Nations High Commissioner for Human Rights, said Suu Kyi should have resigned if she could do or say nothing against the military’s crimes against humanity.

The UN Security Council visited Myanmar in March, with plans for a fact-finding mission to investigate the situation. Myanmar banned the mission, which then had to interview hundreds of Rohingya refugees fleeing to neighbouring Bangladesh.

The report of the mission names six senior military officers who should be put on trial at the International Criminal Court. It also blames Suu Kyi for doing nothing to stop the mass atrocities. In turning things around by inverting the truth, Myanmar’s government rejected the report outright. Instead it blames those responsible for producing what amounted to a pack of lies.

Myanmar officials should know about telling lies. The army’s public relations unit called True News produced a book with photos allegedly showing Rohingyas attacking other locals. Reuters examined the photos and found that they came from somewhere else – Bangladesh’s 1971 independence war, when Pakistani troops attacked Bangladeshis. Government and military spokesmen could not be reached for comment. An Information Ministry official declined comment by saying that he had not seen the book, which is on sale publicly.

After the international community had pressured Myanmar to take back the hundreds of thousands of refugees it had expelled, it announced the return of a family of five Rohingyas from Bangladesh in April. Bangladesh immediately denied that had happened. An independent refugee expert agreed with Bangladesh, saying that Myanmar’s claim of repatriation was yet another publicity stunt.

Meanwhile Myanmar’s verification process for Rohingya returnees remains obstructive. Among the requirements is that the Rohingyas must renounce their claim to ever being a citizen of Myanmar, placing them officially as illegal migrants liable for deportation. Rohingyas want to return home to rebuild, so long as they can enjoy basic human rights and freedom from persecution. Myanmar only has to agree to this.

It is difficult to see how Myanmar can agree to anything decent given all that has happened and continues to happen. Rohingya men, women and children have been slaughtered or otherwise terrorised and their homes razed in driving them from their land.

There may be valuable minerals in the ground in Rakhine state, and politicians, business people and the military may exploit them better if the population was cleared or reduced. Hence, “ethnic cleansing.” The Myanmar military or Tatmadaw has fought internal wars with dozens of ethnic minority groups, some of which have become defunct or which have been engaged in talks with the government. At least nine militant ethnic groups remain. Yet the Rohingyas are not among them, since they are not even recognised as an ethnic minority. Rohingyas are the most persecuted of all the minority communities also because they have fought back the least. The Tatmadaw’s bullying style is to target the weakest the most.

The Arakan Rohingya Salvation Army (Arsa) has conducted some sporadic operations against the army, but nothing like the other ethnic minority armies. The Tatmadaw then exploits Arsa’s resistance efforts as a pretext to persecute Rohingyas further.

Even as Suu Kyi joins her generals as international pariahs, Australian Prime Minister Malcolm Turnbull feted her in Sydney in March. Within 23 weeks Turnbull was removed as Prime Minister, and in another week he had left Parliament altogether. Would Suu Kyi go down a similar road?

It is no longer a secret that the real power in Myanmar still lies with the military. Suu Kyi may be afraid that if she did anything decent about the Rohingyas she may be out of a job. She is known to have said: “It is not power that corrupts but fear. Fear of losing power corrupts those who wield it”. Has she been corrupted by power? She may say no, if only because she never had it. Then she should have no fear of losing what she never had.

She has also said: “The only real prison is fear, and the only real freedom is freedom from fear.” The Myanmar military has allowed her outside her house for some time now. But will she allow herself to enjoy real freedom?

She may have no power over the Tatmadaw, but she has power over her own actions. Rohingyas hope their leader will let them enjoy freedom too.