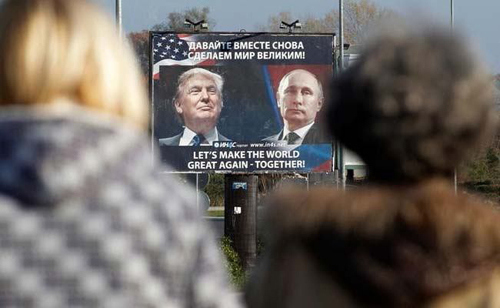 TOP meetings of political leaders are supposed to mean something important and special.

However, such meetings of leaders at their respective peaks, or summits, tend to be overdone by many countries for their perceived glamour value.

Even the supposed chutzpah and gravitas that summitry participants believe they would acquire seem to be wearing thin. Most summits appear to be no more than glorified photo-opportunities, a thriving cottage industry and something of a jet-setting racket. Nonetheless, while routine summits between the leaders of Togo and Nauru may not seem likely, much less determine global events, a rare summit of major world powers is always significant. When US President Richard Nixon met Mao Zedong and Zhou Enlai in Beijing in 1972, the occasion deservedly made world headlines.

Not only did they meet as the Cold War raged, but a conservative US President and leader of the “free world” had deigned to travel to China to confer with communist leaders there. Washington found it worthwhile even if the Nixon-Kissinger team was seen to have journeyed far to “pay tribute” to the Great Helmsman. To US National Security Advisor Henry Kissinger, it was clearly more than just a diplomatic trip or even a state visit.

No less important than improving US-China relations, the event developed an implicit US-China pact against the Soviet Union. Nixon-Kissinger drove a wedge between Beijing and Moscow to deepen the Sino-Soviet split of the Khrushchev years. Kissinger had also negotiated separately with Khrushchev’s successor Leonid Brezhnev. The instrumental nature of the Beijing summit could not escape Chinese and US realities. It served only to formalise bilateral ties, and it would take another seven years before their relations could be normalised. One decade-plus after Beijing, President Ronald Reagan and Soviet Communist Party General Secretary Mikhail Gorbachev met in Geneva. The 1985 summit was the first of several.

Again, these had to do with more than improving bilateral relations. Formally they concerned arms limitation and common ties, but more broadly Reagan was also encouraging a reformist Gorbachev to open up his country. Within three months of the initial summit, Gorbachev introduced restructuring (perestroika) in early 1986. The following year Reagan, in a visit to Berlin, rhetorically called on Gorbachev to “tear down” the Berlin Wall. In 1988 Gorbachev introduced a new openness and freedoms in the Soviet Union (glasnost). The Cold War was formally coming to an end – and on Boxing Day 1991 the Soviet Union collapsed.

A summit with the US President, particularly if it is one-on-one, is more than just a White House visit. It is a carefully staged, highly publicised event that is supposed to carry considerable weight and prestige. Senior US officials therefore guard it jealously and grant it sparingly or not at all. Sometimes this means rejecting the prospect of a summit even when it can do some good.

When Senator Barack Obama was asked in mid-2007 if he would agree to unconditional talks with the leaders of Cuba, Iran or North Korea, he said he would.

An immediate backlash erupted, particularly from Hillary Clinton, Obama’s main rival as party nominee for the presidential campaign. She condemned his readiness to negotiate as “irresponsible” and “naïve”. Ironically, just months before, Hillary voiced support for the US President talking with his global adversaries. She even claimed to have advised George W. Bush to proceed with such talks.

As usual, politics gets in the way of judicious perceptions of meaningful summits. The purpose and value of summits are diminished as a result. The two inter-Korean summits in April and May this year signalled the opening of North Korea and its readiness to negotiate away its nuclear arms stockpile.

Both summits were preceded, and followed, by summits in China between North Korean leader Kim Jong-un and Chinese President Xi Jinping. All these summits with Kim were merely the build-up to the grand prize – the Trump-Kim summit in Singapore of June 12. This was a first, and a summit to be held without preconditions.

North Korean leaders had wanted a summit with a US president for decades. And, until Trump, US presidents had snubbed all such previous prospects. Most US officials have hitherto regarded such a summit as a “reward” for an autocratic North Korean leader, oblivious to the goodwill and confidence-building it can generate. Still, the Singapore summit was generally regarded positively. Both leaders smiled pleasantly to the cameras and to each other, projecting cordiality without mishap. Whatever the US Establishment might have thought then, or since, the international community welcomed the summit as a timely occasion heralding better times on the Korean peninsula and in Asia.

Warming to summit mode, Trump’s presence at the Nato summit in Brussels this month saw him in his trademark brusque transactional style. There was no diplomatic incident only because there was nothing diplomatic about it. Trump reportedly rattled alliance presumptions and insisted that Nato allies pay more. This came just weeks after Trump alienated trade partners in Europe and Asia with tariffs. The Nato summit in turn left the security alliance feeling less than secure.

From Brussels Trump moved on to Helsinki, where he sat down with Russian President Vladimir Putin for a four-eyes summit. The US media had no summit agenda and promptly speculated on what was discussed. Inevitably a main item for the media was the alleged Russian meddling in the 2016 US presidential campaign. Did Trump succeed or fail in accusing Putin of such meddling to his face?

Such distractions divert from the actual content of the summit. When news broke about the summit covering a referendum for eastern Ukraine, some news reports focused on that but the alleged “meddling” issues remained. A summit-friendly Trump remains persona non grata to the US military industrial complex despite his show of violence in Syria, so the US deep state still wants to see him go. Even as his presidency moves towards the mid-term, hopes of impeachment still linger.

Multiple investigations into supposed collusion between Russia and the Trump campaign continue to pile on the pressure. But no sooner had Trump admitted that he “misspoke” to Putin at the summit, than he announces his invitation to Putin to visit the White House in the coming months.

This “return summit” is where Trump would now say the right things, or at least not say the wrong things. By now the US mainstream media, having thoroughly demonised Putin, relished a grand opportunity to take down Trump by association. Trump may be getting the hang of summits, in stages, and possibly even enjoying summitry. However the knack of outpointing him by fair means or foul at such events remains with the US mainstream media.

The setup is not usually advantageous to a sitting President, especially when it is President Trump. He could reign supreme in his businesses, his companies and his reality television shows.

But the presidency is a different kind of “business” altogether. Unlike other businesses where he may be the boss, a democracy makes everyone else the boss of the leader.

Mr. Bunn Nagara was Associate Editor and Foreign Editor of Star Publications, Senior Analyst and Visiting Fellow at ISIS, Research Fellow at ISEAS and ASEAN Fellow at the Japan Institute of International Affairs. He held senior posts at New Straits Times, New Sabah Times and TV3 News, was Editor of New Voice of Asia journal, Contributing Editor of South Review, and analyst at Malaysian Industry, ABC (Australia) Radio and commentator on Asiaweek and Aljazeera. For covering the 1986 People Power Revolution, he received an NUJ citation and a Medal of Honor nominated by Philippine media and church leaders. Bunn has published in Race and Class, The Indonesian Quarterly and Contemporary South-East Asia journals besides the Asian press. He co-authored Agents of Peace: Public Communication and Conflict Resolution in an Asian Setting (Jakarta, 2004), Regional Order in East Asia: ASEAN and Japan Perspectives (Tokyo, 2007), and The Rise of China: Perspectives from Asia and Europe (New Delhi, 2008). He has contributed to undergraduate, civil/public service and journalism courses. He graduated from Southampton University and obtained a Post-Graduate Diploma from Uppsala University. He is a life member of the Malaysian Social Science Association and the Malaysian Association for American Studies, and is an East-West Center Associate. His research interests span ASEAN, East Asian integration and global power relations.
By: Bunn Nagara
3,842FansLike
5,870FollowersFollow
128SubscribersSubscribe