All eyes were on the Capella Hotel in Singapore, the location of the historic summit between the President of the United States (US), Donald Trump and Supreme Leader of North Korea, Kim Jong Un.

The previously unimaginable encounter saw the leader of the free world shake the hand of a third-generation leader of a ruling dynasty, whom just months ago, he had an intense verbal exchange with and threatened to rain “fire and fury” if the latter endangered the US.

It was a day filled with smiles and compliments that ended with the signing of a joint Singapore Declaration outlining commitments by both sides towards achieving peace in the Korean Peninsula.

“We both want to do something,” Trump said during the signing ceremony, with Kim seated next to him. “We both are going to do something. We’ve developed a very special bond.”

North Korea had agreed to a “complete denuclearisation of the Korean Peninsula” – a phrase often used by Pyongyang which many have pointed to as falling short of the US’ demand for a “complete, verifiable and irreversible dismantlement” (CVID) of the North’s atomic arsenal. The US, on the other hand committed to providing a security guarantee to Pyongyang.

Nevertheless, Trump hailed the meeting a success and alluded to a possibility for future meetings.

“We’ll meet again. We will meet many times.” Trump said, subsequent to the signing ceremony while standing with Kim on the veranda where they first met.

South Korean President, Moon Jae-in said that the agreement will put an end to the Korean War – a remnant of the Cold War. Earlier, Moon, who was reported to have spent a “sleepless night” ahead of the summit hoped that the summit would result in “a complete denuclearisation, peace and a new era.”

His counterpart in Japan, Shinzo Abe welcomed the document as a “first step” towards denuclearisation.

“Through this US-North Korea summit, Chairman Kim Jong Un’s intent for complete denuclearisation of the Korean peninsula was confirmed in writing,” Abe was quoted as saying by Agence France Presse (AFP).

“I support this as a first step to the comprehensive resolution of issues concerning North Korea,” he added.

Over in China, Chinese Foreign Minister Wang Yi was quoted by AFP as saying that the fact that both Kim and Trump “can sit together and have equal talks has important and positive meaning and is creating a new history.”

“Resolving the nuclear issue, on the one hand of course is denuclearisation, full denuclearisation. At the same time, there needs to be a peace mechanism for the peninsula, to resolve North Korea’s reasonable security concerns,” Wang said.

Kim left to Pyongyang soon after signing the joint declaration, however, Trump stayed back to address the scores of international media present at the venue.

During the press conference, a jubilant Trump shed more light on the details of his conversations with Kim, calling the meeting a “tremendous success.” The talks with Kim, he said, were “honest, direct and productive.” He added that they both touched on various issues including human rights affairs and the closure of a missile engine test site in North Korea.

He also raised hopes that the Korean War, could end, noting that the Cold War hostilities ceased thanks to an armistice, not a peace treaty.

Follow up US-North Korea talks are slated to take place next week.

On the issue of sanctions, Trump mentioned that he had 300 sanctions ready to be levied on North Korea but did not go ahead with them as he didn’t want to derail the progress that could be achieved at the summit. The sanctions would remain on the hermit state for now, but Trump expressed that he wanted to remove them as soon as he can.

“The sanctions will come off when we are sure that the nukes are no longer a factor. I hope it is soon… at a certain point I look forward to taking them off,” Trump said.

Trump also announced that the US would be stopping its military exercises in the Korean Peninsula, calling it a “proactive” move which would “save us a lot of money.”

“Under the circumstances we are negotiating a complete deal. It is inappropriate to have war games,” he added. “Number one, we save money. A lot. Number two, it is really something they very much appreciated.” 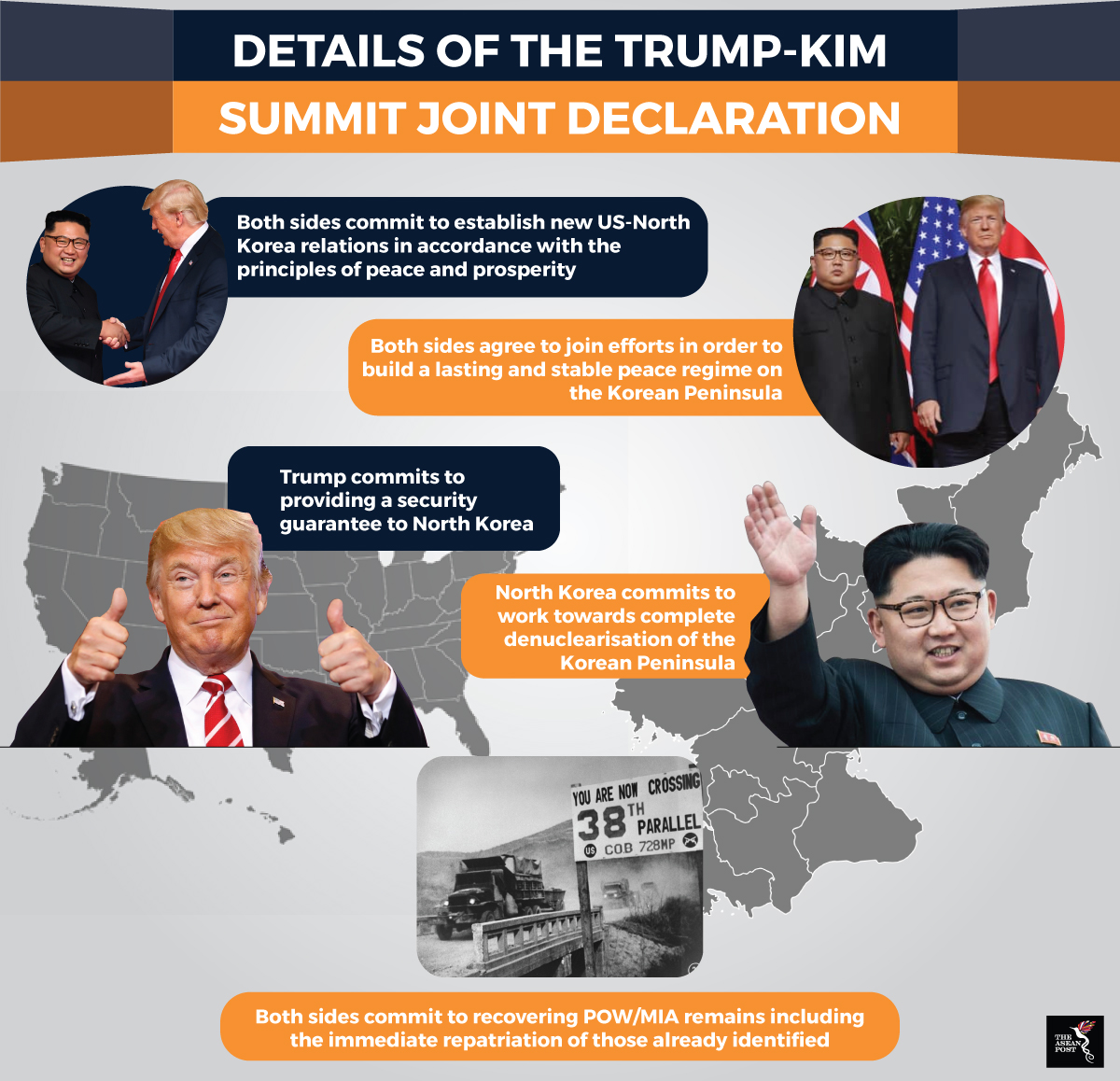 According to Korean security affairs expert, Hoo Chiew-Ping, the ceasing of war games with South Korea is representative of the security guarantee that the US has promised the North as per the joint declaration. On the overall success or failure of the summit, she remained cautiously optimistic.

“Trump’s press conference revealed that substantive discussion had took place between the US and North Korea and it is highly hopeful for North Korea to carry out the promises,” she said. “For me, the implementation still remains sceptical.”

Echoing her remarks on the implementation of the joint statement, Harris Zainul, researcher at the Kuala Lumpur based Institute of Strategic and International Studies (ISIS) foresees potential sticking points in negotiations over what would constitute “denuclearisation.”

“Despite the leaders meeting, I doubt Kim Jong-un would have been sufficiently reassured of his security to undertake unilateral denuclearisation without legitimate security guarantees,” he said.

“So, this leads to the question on who makes the first concession?”

Zainul also pointed out that the “denuclearisation” clause in the statement failed to fully explain if it would also include South Korea. That, he said, would mean that Seoul would have to withdraw from the US nuclear umbrella and is uncertain over how this would be carried out.

This article first appeared in The ASEAN Post on 12 June 2018.