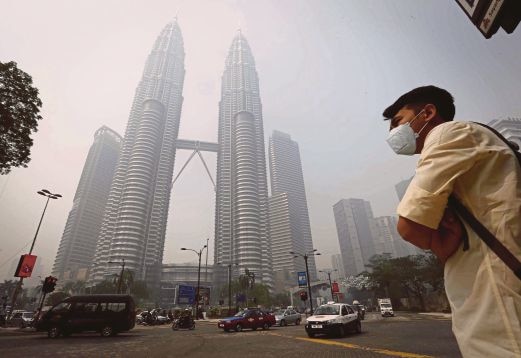 As the smog engulfs the region, many have questioned whether we are doing enough to hold those responsible accountable.

The challenge is that resolving the problem is mostly beyond Malaysia’s jurisdiction.

Pollution from haze is transboundary and respects no borders, with its severity depending on the number and proximity to hotspots, or burning activities resulting in haze. Last Friday, 183 hotspots were detected in Kalimantan and seven in Sumatra.

Many have demanded Indonesia be liable for damages. With health impacts and economic repercussions, it is logical that the source state should take responsibility.

However, dealing with transboundary pollution is a major challenge where the principle of international law is based on Westphalian sovereignty, which gives each nation state sovereignty over its territory and domestic affairs.

While international law has evolved in recent times to recognise principles and doctrines, such as the “duty not to harm others” and “good neighbourliness”, its major failing is in its lack of means for enforcement.

The Chernobyl disaster in 1986 highlighted this shortcoming. Despite radiation travelling to more than 20 downwind states and damage beyond the boundaries of the former Ukrainian Soviet Socialist Republic of the Soviet Union, recovery was impossible as the primary means of enforcement remain in domestic courts, and in particular, of the transgressor state.

The effectiveness, therefore, depends on the extent to which the state incorporates international law into its domestic laws.

This has led to calls for using domestic courts to enforce transboundary pollution offences.

Singapore’s Transboundary Haze Pollution Act 2014, which enables regulators to sue individuals or companies in neighbouring countries that cause severe air pollution in Singapore, was lauded as a new way of doing things.

Despite this, its effectiveness is being questioned, with using the domestic legal system to address transboundary pollution risking international relations by undermining the legal authority of the respective country.

As a case in point, at least partly in response to the enactment, Indonesian Vice-President Jusuf Kalla remarked last year that “for 11 months, they enjoyed nice air from Indonesia and they never thanked us”.

Recently, Indonesia has made commendable moves to tackle the problem.

Earlier this month, a Jakarta district court ordered a sago plantation company to pay a record 1 trillion rupiah (RM320 million) for causing uncontrollable fires last year, the biggest fine ever imposed on a plantation company. Indonesia also strengthened regional cooperation by adopting the roadmap for a haze-free Asean by 2020.

The recurring haze is symptomatic of a larger issue at stake, that is, the collective failure to acknowledge the environment as a vital component of our lives. As the monsoon winds change direction and clear the haze, it also brings along with it our sentiment on the importance of clean air to our livelihoods, and by extension, the value of a healthy environment.

Acknowledging that a healthy environment is a basic human right may sound obvious to some, but until relatively recently, it was not included in declarations of human rights or national constitutions.

This has started to change since sustainable development has become a global agenda, starting from the United Nations Conference on the Human Environment in 1972.

It is estimated that 92 countries have included a constitutional right to a healthy environment. In 2010, Bolivia raised a few eyebrows by even assigning “rights to mother earth”.

In the region, the Asean Human Rights Declaration, adopted in 2012, acknowledged this notion by including “the right to a safe, clean and sustainable environment”. However, only Indonesia, the Philippines and Thailand include constitutional rights to a healthy environment.

As domestic legal systems reign supreme, it is vital that firstly, countries, through constitution or other means, recognise environmental rights of their citizens. Procedurally, this will empower citizens to enforce these laws against polluters. The establishment of the Malaysian Environmental Court in 2012 is a step in the right direction.

Secondly, proposals to expand citizen enforcement for transboundary pollution, either through regional agreements or international law, should be considered. This would transfer the burden of international law, with the need to balance protection of human rights with resolving international disputes peacefully, to domestic legal mechanisms that provide access to environmental justice beyond one’s borders.

The effectiveness of a rights-based approach and the feasibility of such mechanisms in the context of Malaysia and the region remain debatable.

Nonetheless, as one of the most mega-biodiverse regions in the world, and almost one year since the Sustainable Development Goals were adopted by the United Nations as the 2030 Development Agenda, it is timely to consider options in ensuring that development is balanced with the right of everyone to enjoy a healthy environment.

Mr Alizan Mahadi is a Senior Fellow with the Technology, Innovation, Environment and Sustainability (TIES) division at the Institute of Strategic and International Studies (ISIS) Malaysia. Previously, he served as the Special Officer to the Science Advisor to the Prime Minister and Chair of the Intergovernmental Science-Policy Platform on Biodiversity and Ecosystem Services (IPBES). Alizan is currently completing his PhD at the School of Media and Governance at Keio University, Japan on understanding the influence of Sustainable Development Goals (SDGs) to address interlinkages across SDGs. His research area includes governance of and for sustainable development and global environmental governance and was previously the lead author for the National Readiness study to implement the SDGs for the Economic Planning Unit of Malaysia. His other areas of research include institutions for sustainable development and sustainable consumption and production. He is currently a team member of Future Earth’s Knowledge Action Network on SDGs (SDGs KAN). Alizan also has extensive experience in network building, including being a founding member of the Malaysian CSO SDG Alliance and the founding principal officer of the Sustainable Development Solutions Network (SDSN) Malaysia Chapter. Alizan has a MSc in Sustainable Development from University of Uppsala, Sweden and had 5 years of experience as a sustainability consultant in the United Kingdom prior to that.
By: Alizan Mahadi
3,890FansLike
6,103FollowersFollow
128SubscribersSubscribe