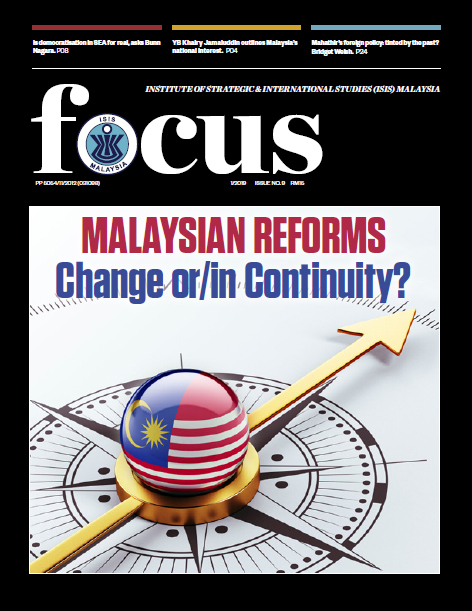 ISIS Malaysia’s mandate is to conduct independent public policy research in the national interest and for the government of the day. Despite an almost inseparable link between public policy and politics, the latter is not, and has never been, an area of institutional research. This is to avoid the kinds of partisanship and involvement that contradicts the Institute’s raison d’etre and compromises its ability to serve the government of the day.

Senior researchers, however, do keep close watch over domestic politics. Foreign and even local government officials, scholars and corporate executives frequently ask for political perspectives to better understand the content of public policies for the present and future. Meeting these demands require knowledge of the political developments.

Following Malaysia’s May 9th change in government, the trajectory of national policies has come under intense scrutiny. The issue of how political power is acquired, intermediated and used is pressing for the country. This has already been a live issue among the public for the past one year with a plethora of viewpoints. This issue of ISIS Focus centres on the theme of “Malaysia’s Reforms: Change or/in Continuity?”

We begin the issue by asking Malaysian thought leaders about their views and are thankful that some have responded. Our researchers and friends then contribute their thoughts on particular aspects of political, economic, environmental, social and foreign policy changes. Obviously, the range of possible issues and areas of contestation extends far beyond these and the topics covered should not be viewed as comprehensive. Needless to say, while some effort has been made to ensure intellectual rigour, the views and opinions expressed are the authors’ and interviewees’ own.

It was Prime Minister Tun Dr Mahathir’s bold initiative that led to ISIS Malaysia’s establishment on 8 April 1983. ISIS connected to but outside of government. It is our hope that the perspectives in this issue of ISIS Focus will throw some light on where the reform process is headed.

Much has been said about “Malaysia Baru” and, more often than not, the concept has been discussed in terms of the destination – Malaysia should be “this” or “that”. What about the processes that need to be undertaken to reach that destination? ISIS Focus reached out to YB Khairy Jamaluddin, Member of Parliament for Rembau, Negeri Sembilan, to share some of his thoughts concerning the nation.

In this region and elsewhere, democratisation has come in spurts and seen reverses. Where it has emerged, it still needs encouragement and nourishment to grow.

Reality Check: The End of Identity Politics?
By Harris Zainul

As the sun rose to a “New Malaysia” on May 10th, Malaysians allowed themselves to hope and dream of what the nation “can nally become” – a hope that Malaysia can consign the relic of race-based politics to the pages of history. But is this hope grounded in reality?

After almost a year of “Malaysia Baru” and a rather not-so-impressive record of promises fulfilled, will Sarawak really be getting what was promised? Or will they continue to be shortchanged by the federal government?

In a Thursday evening press conference on 24 May 2018, Finance Minister Lim Guan Eng confirmed that government debt and liabilities at end-2017 was in excess of RM1 trillion. Within hours, Malaysians all over the country dutifully resumed a longstanding national tradition: complaining about the state of public finances. But how serious is the Malaysian government’s debt?

The (Non) Evolution of Malaysia’s Public Sector
By Firdaos Rosli

While Malaysia has gone through different phases of political, social and economic development over the years, the underlying organisational structure and functions remain predominantly the same today. In light of the historic election results in May 2018, public organisations have evolved into a permutation of regulatory capture that is reactive rather than proactive in adapting to changing times.

The narrative on Malaysia’s environment policy has always been about preservation and conservation. Post May 9, we need another noun in our policy vocabulary to rebuild the country – restoration.

Back To The Past?
By Bridget Welsh

Amphetamine-type stimulants (ATS) have overtaken opioids as the drug of choice for drug users in Malaysia. Is the country well-equipped to respond to this rising threat? What are the implications for treatment and rehabilitation?