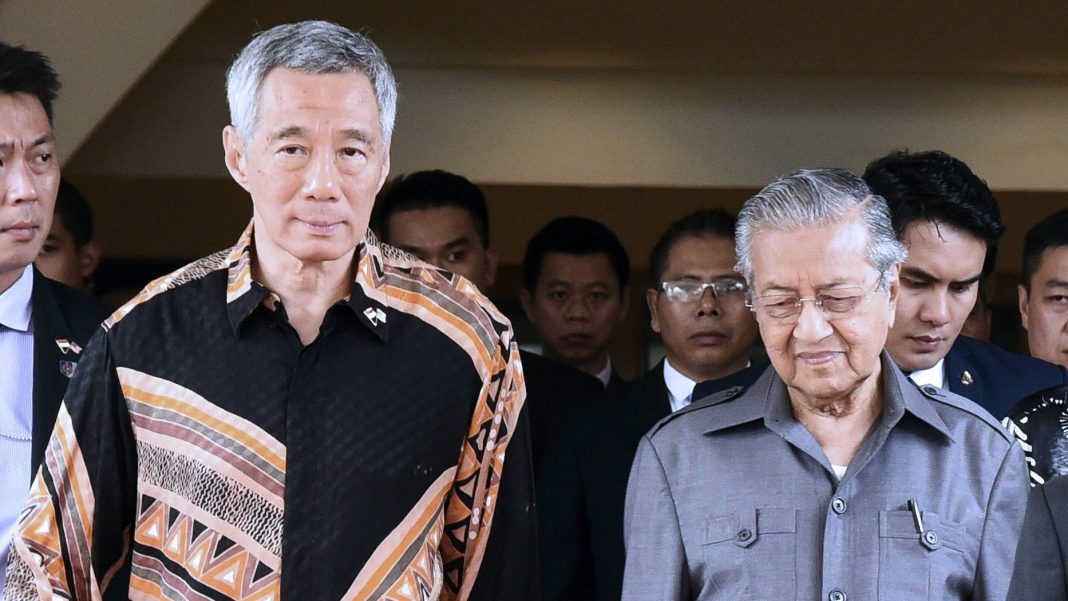 KUALA LUMPUR – Relations between Singapore and Kuala Lumpur are being put to the test as Malaysian Prime Minister Mahathir Mohamad revisits a delicate territorial issue.

On Wednesday, the newly elected Mahathir said Malaysia plans to enlarge some offshore rocks near Singapore, a proposal that could rankle its southern neighbor. Days earlier, the prime minister canceled a planned cross-border rail link.

“It is our intention to enlarge them to form a small island,” said Mahathir.

The prime minister was referring to the Middle Rocks, two tiny islets separated by over 300 meters of open sea. The rocks were part of a territorial dispute with Singapore that was settled in the International Court of Justice in 2008. Malaysia was awarded the Middle Rocks, while Singapore was given Pedra Branca, another outcrop about a kilometer away.

The rocks, home to lighthouses in the eastern sea lane of the Singapore Straits, have served as navigational beacons since British colonial times, but were the subject of a dispute during Mahathir’s earlier years as prime minister.

The court’s decision of awarding each a piece of the disputed territory may seem fair, but not to Mahathir. In his self-authored 2011 memoir, “A Doctor In The House,” Mahathir claimed that Singapore had unilaterally claimed all territorial waters and seabed resources in areas surrounding the islets. “It is hard to be a good, amicable and trusting neighbor to someone who is unable to concede that anyone else is entitled to anything,” he wrote.

Malaysia has since built upon the Middle Rocks, adding a helipad, a jetty and surveillance facilities. The Abu Bakar Maritime Base, named after a deceased sultan in the southern state of Johor, opened in November as a “display of national sovereignty,” according to state news agency Bernama. The base, manned around-the-clock by officials from an agency under the Prime Minister’s Department, functions as a security and marine research facility.

Mahathir has not indicated the reason for expanding the Middle Rocks. His immediate priority remains reducing debt, leaving foreign policy in a “holding pattern,” observed Tang Siew Mun, a senior fellow at ISEAS-Yusuf Ishak Institute, a Singapore think tank. “Mahathir is likely to guide Malaysia back to being an independent and principle-based foreign policy,” said Tang.

This was demonstrated by Malaysia’s recent decision to drop appeals against the ICJ judgement. Singapore’s Ministry of Foreign Affairs mentioned this in a statement on Wednesday, saying that Malaysia had decided to withdraw two appeals filed in February and June 2017.

“We were confident of our case, and the correctness of the original ICJ decision,” said Singapore Foreign Minister Vivian Balakrishnan. “When Malaysia requested to discontinue the cases without them being argued, we were happy to agree.”

A foreign policy expert at the Institute of Strategic and International Studies said Malaysia expects Mahathir to make decisions collectively under a coalition government made up of former political rivals. “Mahathir is arguably operating in a different environment, where he is not expected to rough things out,” said analyst Thomas Daniel.

But the 92-year-old leader can also surprise, as seen in the May 9 elections.

Singapore’s Prime Minister Lee Hsien Loong was one of the earliest leaders to pay Mahathir a courtesy visit on May 19. “You are our nearest and closest neighbor, so when this happened I thought I would come up soon, touch base, renew our links,” Lee told Mahathir.

Lee probably knows that relations were frosty during Mahathir’s first term in office between 1981 and 2003, a period when Lee’s late father Kuan Yew was prime minister, then later senior minister. Back then, thorny issues over the water supply, airspace and railway land dominated bilateral discussions.

Thomas is a Fellow in the Foreign Policy and Security Studies Programme of ISIS Malaysia. His interests lie in the security/strategic challenges and impacts of major power dynamics on ASEAN and its member states, the South China Sea dispute, and Malaysia’s national security and foreign policies. Thomas also looks at the policy implications of refugees, asylum seekers and other displaced persons in Malaysia, and the Malaysian government’s refugee policy of “not having a policy”. Thomas obtained his Master of Arts in International Studies from the University of Nottingham (Malaysia) where he graduated with Distinction, completing a dissertation that assessed Malaysia’s responses to China in the South China Sea dispute through the balance of threat approach. He also holds a BA in Communication and Media Management, and a BA Honours in Communication, Media & Culture from the University of South Australia. Previously, he was a public relations practitioner focusing on social media management and media engagement strategies for clients from the government and enterprise technology sectors.
By: Thomas Daniel