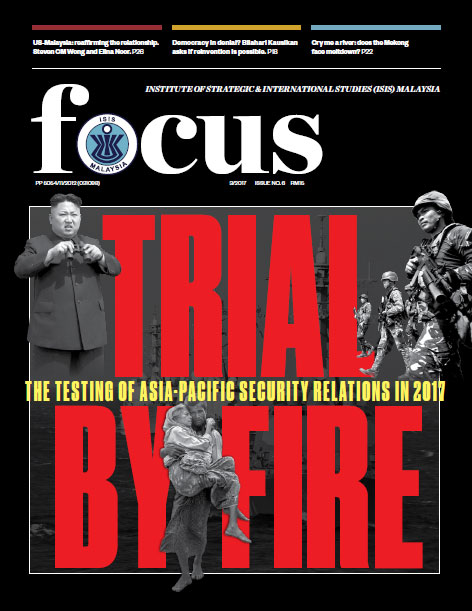 Peace and security in the Asia-Pacific region continues to be tested and it is no wonder that more than a few analysts are growing increasingly uneasy at present trends and trajectories. With the situation in the Korean Peninsula growing past worrisome, it is not a source of comfort that inter-state relations in the rest of the region, from the mighty US-China-Japan triangular down to the Mekong Subregion, are not all that they could or should be. This issue picks up key themes drawn from the Asia-Pacific Roundtable (APR) 2017, as well as from more recent scans of the horizon. Thomas Daniel argues that it is not all about superpowers and that middle powers, such as Australia, India, Japan, South Korea and even Indonesia, have a role to play. We took the opportunity to interview noted Japanese scholar Takahara Akio for his candid views on Japan’s relations with Asia-Pacific countries, particularly China and ASEAN. Collin Koh of the S Rajaratnam School of International Studies examines the military modernisation in the region and forsees the trend of naval build-ups continuing.

Farlina Said and Naufal Fauzi cover challenging attempts by governments to come to terms with the governance of cyberspace, especially since the majority of the infrastructure is privately owned. Firdaos Rosli and Dwintha Maya Kartika report on attempts to salvage the Trans-Pacific Partnership (TPP) by the remaining signatories after the pull out by the United States in January this year. For good measure, an analysis by Giuseppe Spatafora of the prospect of negotiating an European Union-Malaysia Free Trade Agreement has been added.

On a more current note, Bunn Nagara explains the background behind the Marawi conflict in the Philippines, the alleged links with Daesh in Syria and Iraq and prospects for peace in Mindanao going forward. At a time when more time and energy appears to be devoted to deconstructing rather than building relationships, Steven CM Wong and Elina Noor cover the Malaysian prime minister’s Washington DC visit in September and its implications.

Perhaps one of the most interesting overarching perspectives to emerge from the 31st APR was Bilahari Kausikan’s analysis that one of the biggest security threats is not security-related at all: rather it is repairing dysfunctional democracy. The challenge, he says, is to admit and rethink democracy although “the situation will
probably have to get far worse before it can get better”.

On that cheerful thought, the Editors wish you happy reading.