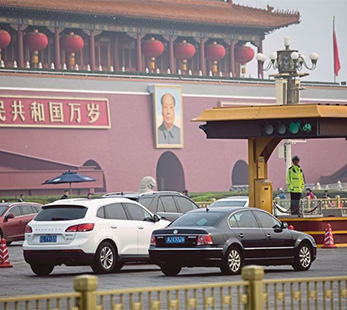 CHINA is an emerging economy unlike any other before it. No emerging economy has appeared on the world scene with the range and breadth of capabilities that China has developed, is developing and seeking to develop.

Its list of mind-blowing achievements is so extensive that they have become almost humdrum. Not bad for a country that still regards itself as a developing one and whose leaders openly and regularly engage in self-criticism, as the recently concluded 19th Communist Party Congress demonstrates.

Consider this: China produces among of the world’s fastest supercomputers and — get this — using its own designed processors and operating system. The Sunway Taihu Light was crowned the fastest computer last year with a capacity of 93 quadrillion calculations a second.

This looks likely to be toppled by the United States soon, but China will no doubt seek to make a comeback.

The country is the world’s genetic research powerhouse, decoding the complete blueprints of tens of thousands of human, plant and animal life every year. It already mass produces cloned plants and animals, and, reportedly, has the capacity to do so with humans.

One Canadian scientist put it this way: “Others talk about it, but China does.”

Earlier this month, China officially commissioned its fifth and latest generation stealth fighter, the Chengdu J-20A, into service. Quality aside, the only other countries to operate such technologically advanced military aircraft is the US and, perhaps, Russia.

These and other achievements make the fact that it seeks to compete with the world’s best in manufacturing passenger aircraft, high-speed railways, space travel and so forth almost common place.

Almost everything that China does, from making and building things to research and development, happens with dedicated and frenzied energy.

According to the Organisation for Economic Cooperation and Development (OECD), China’s spending on science and technology research, at 2.1 per cent of its gross domestic product (GDP), is second only to the US at 2.7 per cent. It expects that China will surpass the US by 2020.

On paper and because of its very large population, China has about a GDP per capita at purchasing power parity that is just 29 per cent of the US and 58 per cent of Malaysia’s.

Virtually every world competitive ranking currently devised has gotten it wrong. China generally occupies the middle order of these tables even though it represents the keenest competitor to American and European businesses and industries across a whole range of products.

China’s technological prowess is either at, or almost at, the leading edge. Over time, weaknesses and defects, of which there are still many, will be overcome, and its abilities sharpened.
As the country seeks to boost Chinese investment in general, and infrastructure, in particular, it can be expected that imports from China will further rise.

When asked to ensure technology transfer, a mind-boggling simplistic request that Malaysians have made for three decades, the answer was that intellectual property belonged to Chinese companies and not the government, let alone Chinese President Xi Jinping.

These responses could be put down to insincerity, except that they have all been heard before and from the different countries that have surpassed us. Does it say more about them or about us?
If a country has the ability, the decision could be made to engage in high-stakes competition. For the rest of us, our strategic interests logically lie in taking a position to (hopefully) cooperate with China.

Politicisation of the bilateral relationship does not help. The world is undergoing a massive geopolitical and geoeconomic transition and the Asia Pacific is its epicentre.
Malaysia’s sovereignty and interests can and must be safeguarded as best as it can. But, this cannot be at the expense of logic and pragmatism, which will only weaken our economic foundations. Human knee-jerk reactions may be completely understandable, but closing one’s eyes and ears will not make China go away, as some would have us do.

This article first appeared in The New Straits Times on 31 October 2017.

Dato’ Steven CM Wong is Deputy Chief Executive of the Institute of Strategic and International Studies (ISIS) Malaysia. He also heads the economics division of the Institute. Dato’ Steven has been involved in the public policy arena for more than two decades, 20 years of which has been with ISIS Malaysia. He spent a further eight years in the private sector where he held positions in management consultancy, economic research, fund management, corporate finance and capital markets. He is currently a columnist for the New Straits Times. He was a member of the Ministry of Human Resource’s Technical Committee for the Minimum Wage and Tenaga Nasional Berhad’s Economic Council. He has served as the Secretary-General of the Malaysian National Committee for Pacific Economic Co-operation, the Malaysian Committee for Pacific Basin Economic Co-operation, and was on the secretariats of two ASEAN Eminent Persons Groups. He has been published by the Organization for Economic Cooperation and Development (OECD), the East Asian Institute at the University of California, Berkeley, the Australian National University and the Institute of Southeast Asian Studies (ISEAS), Singapore. His latest publications are on ASEAN-China trade for China Economic Quarterly (June 2013) and a chapter on Malaysia’s financial sector and capital market in Malaysia: Policies and Issues in Economic Development published (ISIS Malaysia, 2011). Dato’ Steven’s interests are in macroeconomic and international finance matters but he has wide-ranging interests including institutional economics, international relations and theology. He received his graduate and post-graduate education at the University of Melbourne in Australia.
By: Steven Wong
3,949FansLike
6,215FollowersFollow
128SubscribersSubscribe