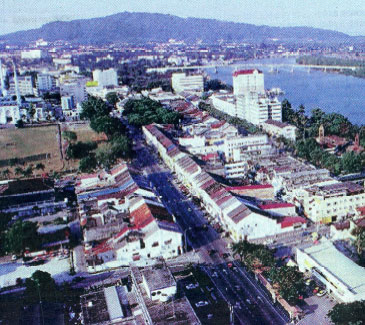 IN a meeting in Johannesburg last week attended by more than 100 African ministers and their officials, Chinese Foreign Minister Wang Yi announced that China has made more than US$46 billion (RM242 billion) of direct investments and commercial loans in Africa since December last year.

These followed the promise made by Chinese President Xi Jinping at the Johannesburg Summit last December to have 10 major China-Africa cooperation plans over the next three years in which China would provide US$60 billion of interest-free loans and lending with preferential terms. South Africa’s coordinator for the cooperation said: “The relationship with China is not one between donor and receiver but one between partners and equals.”

Looking at the frequent announcements of yet another Chinese investment in a country or region, one cannot be faulted in thinking that China’s financing power is the only game in town.
Closer to home, following the Permanent Court of Arbitration’s (PCA) ruling in favour of the Philippines, Philippine President Rodrigo Duterte has been working hard to improve the relationship between the two countries. Duterte has proposed to open bilateral talks with China following the PCA ruling and has said that he would pursue a “settlement” with China, even if this would mean setting aside the decision of PCA.

When Duterte was the mayor of Davao City, he told China earlier this year to “build us a railway just like the one you built in Africa and let’s set aside disagreements for the while”.
Duterte has even appointed the octogenarian former president Fidel Ramos as special envoy to China. Ramos immediately called for a bigger role for Philippines under China’s One Belt One Road Initiative (OBOR), saying that the Philippines is located between two of the most important oceanic trading routes in the world the Pacific Ocean and the South China Sea. One of his claims to fame was singing an impromptu duet with the visiting then Chinese president, Jiang Zemin, a year after handling Philippines’ response to China’s occupation of Mischief Reef when he was president. Singing diplomacy may still work.

China’s huge financing and investment power cannot be denied. In the past, it has been used fairly successfully to forge better relationships at political levels. Deborah Brautigam, a Johns Hopkins University professor, in her book, The Dragon’s Gift, traced the history of China’s use of its financing powers to build relationships with developing countries, a sort of “aid system with Chinese characteristics”. This system has evolved over the years from outright aid to developing countries to investments for “mutual benefits”.

China’s investments in Malaysian infrastructure are also significant. Gaungxi Beibu Gulf International Port Group has a 40 per cent stake in Kuantan Port Consortium and a 49 per cent stake in Malaysia-China Kuantan Industrial Park. SM International Wholesale (China) is operating the Port Klang International Trade and Halal Industry Centre. Guangdong province announced that it will invest US$10 billion in a deep sea port in the Malacca Gateway project. And China is eyeing the KL-Singapore High-Speed Rail (HSR) project.

I was in China last month for a two-week study programme on OBOR and China’s 13th five-year plan, courtesy of the Chinese government. The country has put in a lot of effort to adopt and adapt new technologies. A case in point on how China has progressed is the development of their HSR expertise. Their first official HSR was the 120km Beijing-Tianjin HSR, which opened in 2008. Eight

China’s investments in Malaysian infrastructure are significant. Gaungxi Beibu Gulf International Port Group has stakes in Kuantan Port Consortium and Malaysia-China Kuantan Industrial Park.
years later, China has more than 19,000krn of HSR, more than the rest of the world combined. China targets to have 30,000km of HSR by 2020, but the figure is likely to be 31,000krn.

Asean has a huge demand for infrastructure financing, some US$60 billion a year. Many countries do not have the fiscal space to finance these infrastructure projects nor the technical expertise to carry out these projects. China has both.

Already many of the Asean countries are clamouring to be part of China’s ambitious OBOR plans, re­alising that OBOR may bring not on1y badly-needed financing and investments, but also that they can be part ‘of the larger regional and international interconnectivity. The question now is how these countries might adjust their political relationships with China in their pursuit of China’s supply of financing and investments.

In the communique that was issued last week following the Asean foreign ministers’ meeting in Laos, the United States-backed proposal to refer the PCA ruling was dropped. “We had not sought support from the Asean or the international community in its arbitration case against Beijing over the South China Sea, and did not want to press the issue and risk dividing the group or provoking China,” said Philippine Foreign Minister Perfecto Yasay.