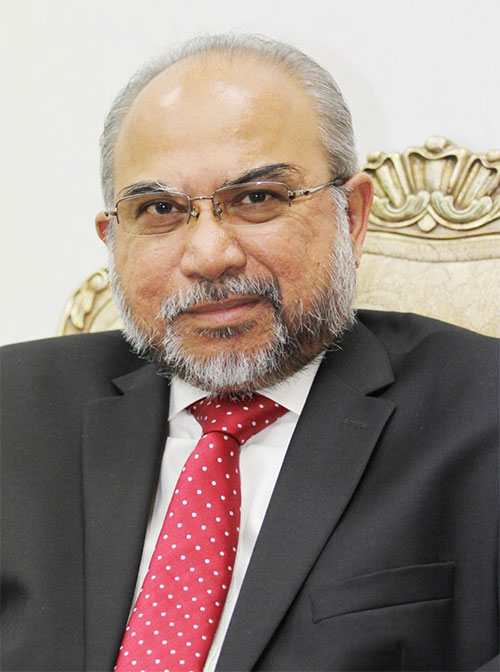 Tan Sri Dato’ Seri Mohamed Jawhar served with the government before he joined ISIS Malaysia as Deputy Director-General in May 1990. He eventually assumed the position of Chairman and Chief Executive and retired as Chairman of ISIS Malaysia on 8 January 2015. 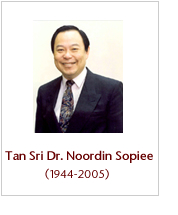 He was also Chairman of the Malaysia National Committee for Pacific Economic Cooperation (MANCPEC), Chairman of Monash University Malaysia and Chairman of Noordin Sopiee & Associates.

He was a Member of the crisis-management Executive Committee of the National Economic Action Council (NEAC) chaired by the Malaysian Prime Minister; the Board of Directors of Malaysia’s Central Bank and the ASEM (Asia Europe) Task Force on Trade, Investment and Finance. He was also Chairman of PCA Hard.Com, one of the world’s largest hard disk component manufacturers. He also served on the Boards of several companies including Reliance Pacific Berhad; Kulim (Malaysia) Berhad; Sunway Holdings Incorporated Berhad; YTL Power International Berhad; YTL Land and Development Berhad; and YTL e-Solutions Bhd.

He was a Member of the Emerging Markets Eminent Person’s Group on Reform of the International Financial Architecture and the National Information Technology Council. He was one of the 100 members of the Club of Rome. He was also a columnist for The Edge (Malaysia), Yomiuri Shimbun and Nihon Keizai Shimbun (Japan).

He graduated with a B.Sc. (Econs) (First Class) and a Ph.D from the London School of Economics and was the author of several books on economics, politics and strategic planning. 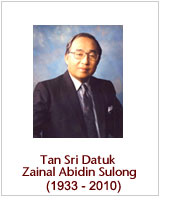 Tan Sri Datuk Zainal Abidin Sulong was the second Chairman of ISIS, a post he held from June 1990 till February 1997 and then became a Special Advisor to ISIS. He was also the Chairman of the Malaysian Industrial Development Authority (MIDA).

He started his career as a Malaysian diplomat in 1957. He had served as the Malaysian Ambassador to Indonesia (1972-1977), the USSR (1977 – 1980) and as the Malaysian Permanent Representative to the United Nations, New York (1980 – March 1984) before being appointed Secretary-General of the Malaysian Ministry of Foreign Affairs in April, 1984.

He retired from the Malaysian Foreign Service in March 1988. He was the Chairman of Perwaja Terengganu Sdn Bhd., Perwaja Steel Sdn Bhd. and Standard Chartered Bank Malaysia Berhad. 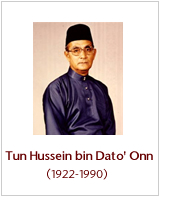 He accepted the appointment a few years after his resignation, due to ill health, as Malaysia’s third Prime Minister of Malaysia (1976 to 1981).

After his Prime Ministership, Tun Hussein continued to contribute to welfare organizations. He was instrumental in the setting up of the Tun Hussein Onn Eye Hospital. He was also an advisor to Petronas, the country’s oil corporation.

Tun Hussein Onn was looked upon as being very sincere in his struggle for racial unity and had a reputation for being firm against anyone who tried to create racial unrest in the county and it was due to this, that he was known as ‘Father of Unity’.

Born in Johor Bahru, Johor on February 12, 1922 to Dato Onn Jaafar and Datin Halimah Hussein, Tun Hussein received his early education in Singapore and at the English College in Johor Bahru.

Prior to entering politics, Tun Hussein studied law in London qualifying as a Barrister-at-Law and setting up legal practice in Malaysia.

Past Chief Executives of ISIS Malaysia

Dato’ Dr. Mahani was the Chief Executive of the Institute of Strategic and International Studies (ISIS), Malaysia from January 2010. Previously, she was the Director General from May 2007 – December 2009.

Dato’ Dr Mahani obtained a Ph.D (development economics) from the University of London in 1992 and was Professor in the Department of Applied Economics at the Faculty of Economics and Administration, University of Malaya until 2007. Her research interests are industrialisation and economic transformation, international trade and regional integration. In 1998, Dato’ Dr. Mahani was appointed a member of the Working Group for the National Economic Action Council, a body established by the Malaysian Government to formulate measures to initiate recovery from the economic and financial crisis. In 2001, she was appointed as the Head, Special Consultancy Team on Globalisation of the National Economic Action Council, and from 2005 to 2007 she worked as the Deputy Director-General, Department of Higher Education, Ministry of Higher Education Malaysia.

She was also a Trustee of Yayasan 1Malaysia, Commissioner of Land Public Transport Commission, Deputy President of the Malaysian Economic Association and Member of International Steering Committee for the Pacific Trade & Development (PAFTAD).

Past Directors-General of ISIS Malaysia

Past Deputy Directors-General of ISIS Malaysia 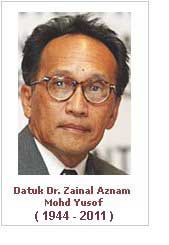 Datuk Dr. Zainal Aznam Mohd Yusof was a Deputy Director-General of ISIS Malaysia from 14th August 1995 until 13th August 2002. Prior to that, he was the Deputy Director of the Malaysian Institute for Economic Research (MIER) and the South East Asia

Dr. Zainal’s vast experience and significant contribution in the field of Economics, both locally and internationally, had enabled him to serve the Government and the private sector in various capacities. He was a consultant of UNIDO/UNDP Malaysia and in the World Bank in charge of The Political Economy of Poverty, Equity and Growth. He was responsible in the preparation of the Industrial Master Plan of Malaysia, the Second, the Fourth and the Fifth Malaysia Plans. While at ISIS, he was a coordinator of the Knowledge-Based Economy Master Plan. 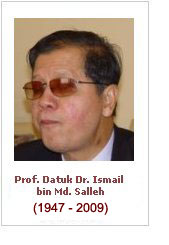 Prof Datuk Dr. Ismail bin Md. Salleh was ISIS Deputy Director-General from 1st January 1993 until 31st August 1994. Before this, he was an Assistant Director-General and had held the position of Head, Bureau of National Economic and Socio – Economic Policy Studies at ISIS Malaysia.

Dr. Ismail graduated with PhD in Economics from University of IIlinois At Champaign-Urbana, Illinois.