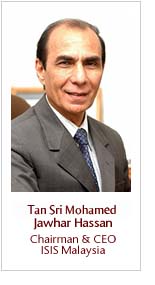 Tan Sri Jawhar was Project Coordinator of Malaysia’s Master Plan on Knowledge-Based Economy. He also helped draft the Report of the Royal Commission to Enhance the Operation and Management of the Royal Malaysian Police.

Tan Sri Jawhar served as a member of Penang Knowledge Economy Information Communications Technology Council (K-ICT Council) since its inception. He was heavily involved in the formulation of the K-ICT Blueprint in support of the government’s goal of making Penang a fully developed state by 2010.