Steps Towards Easing of MCO 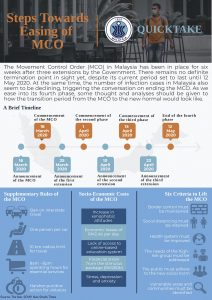 As we move to the fourth phase of the MCO set to last until 12 May 2020, what are the socio-economic costs of a prolonged MCO and the current challenges to consider including a post-MCO exit plan? We cover these perspectives in our latest infographic on COVID-19.
More Details 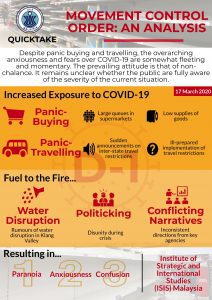 Despite panic buying and travelling, the overarching anxiousness and fears over COVID-19 are somewhat fleeting and momentary. The prevailing attitude is that of nonchalance. It remains unclear whether the public are fully aware of the severity of the current situation.
More Details 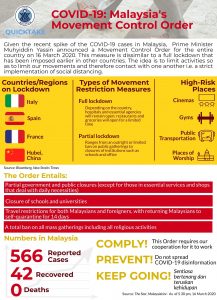 Given the recent spike of the COVID-19 cases in Malaysia, Prime Minister Muhyiddin Yassin announced a Movement Control Order for the Entire country on 16 March 2020. This measure is dissimilar to a full lockdown that has been imposed earlier in other countries.
More Details 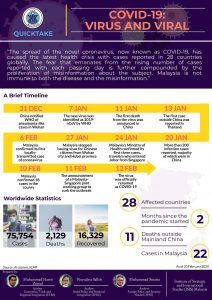 The spread of the novel coronavirus, now known as COVID-19, has caused the latest health crisis with cases reported in 28 countries globally. The fear that emanates from the rising number of cases reported with each passing day is further compounded by the proliferation of misinformation about the subject.
More Details

THE MALAYSIAN ECONOMY: ONE DECADE IN REVIEW 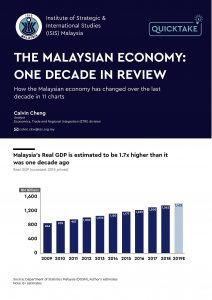 “The Malaysian economy has developed dramatically over the past decade, from 2009-2019. Here’s just how much things have changed, in 11 charts--from growth to exports, to wages and incomes—and what some challenges are for the coming decade.”
More Details 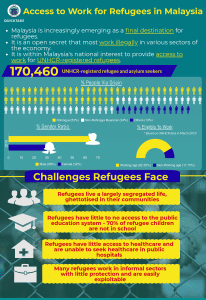 Malaysia is increasingly emerging as a final destination for refugees. It is an open secret that most work illegally in various sectors of the economy. It is within Malaysia's national interest to provide access to work for UNHCR-registered refugees
More Details 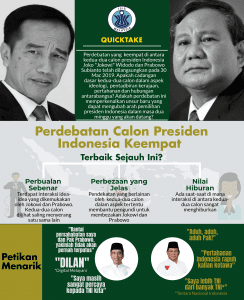 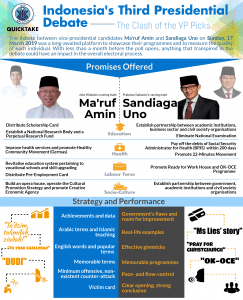 The debate between vice-presidential candidates Ma'ruf Amin and Sandiaga Uno on Sunday, 17 March 2019 was a long-awaited platform to showcase their programmes and to measure the quality of each individual. With less than a month before the poll opens, anything that transpired in the debate could have an impact in the overall electoral process.
More Details

Should Malaysia Take Back Daesh Returnees 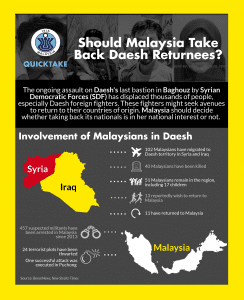 The ongoing assault on Daesh's last bastion in Baghouz by Syrian Democratic Forces (SDF) has displaced thousands of people, especially Daesh foreign fighters. These fighters might seek avenues to return to their countries of origin. Malaysia should decide whether taking back its nationals is in her national interest or not.
More Details 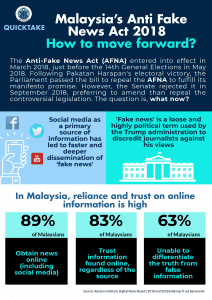 The Anti-Fake News Act (AFNA) entered into effect in March 2018, just before the 14th General Elections in May 2018. Following Pakatan Harapan's electoral victory, the Parliament passed the bill to repeal the AFNA to fulf ill its manifesto promise. However, the Senate rejected it in September 2018, preferring to amend than repeal the controversial legislation. The question is, what now?
More Details 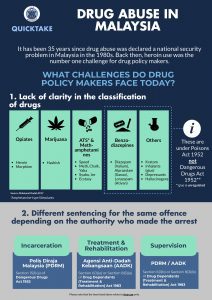 It has been 35 years since drug abuse was declared a national security problem in Malaysia in the 1980s. Back then, heroin use was the number one challenge for drug policy makers.
More Details 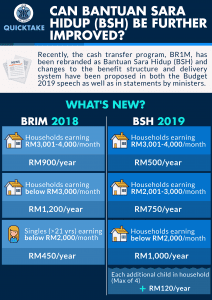 Recently, the cash transfer program, BR1M, has been rebranded as Bantuan Sara Hidup (BSH) and changes to the benefit structure and delivery system have been proposed in both the Budget 2019 speech as well as in statements by ministers.
More Details

Should Malaysia liberalise its rice imports? 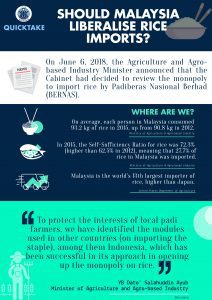 On June 6, 2018, the Agriculture and Agrobased Industry Minister announced that the Cabinet had decided to review the monopoly to import rice by Padiberas Nasional Berhad (BERNAS).
More Details